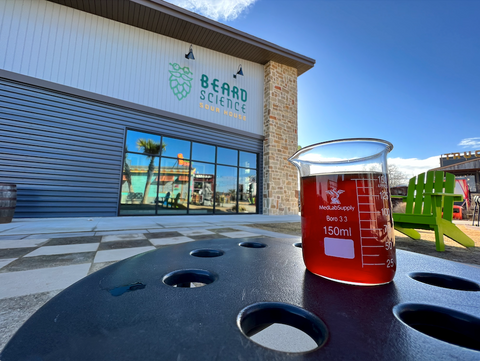 It's been just over a year since Beard Science Sour House opened its doors at Truck Yard in The Colony, setting itself up as the area's lone purveyor of strictly wild and sour beers. Quicker-to-market kettle sour beers have filled the tapwall to this point, but the first of many more long-term fermentations is now ready for release.According to Brew Boss Dennis Wehrmann, exploring the wild and sour beer realm beyond things fast and furious was part of the plan at Beard Science from the start.

"I think the concept of a sour house, the way we planned to do it, you have to compare to how you would start a bourbon distillery," says Wehrmann. "If you make bourbon, it takes years until the product is ready, and it's the same thing with a sour house. Wild and sour beers take time to ferment and mature, so while waiting for these to develop, we've been making kettle sours as well."

From this line of perpetual liquid projects comes the brewery's new Wild Sour beer. Starting with a dark base, Wehrmann literally let nature take its course with the recipe by way of spontaneous...