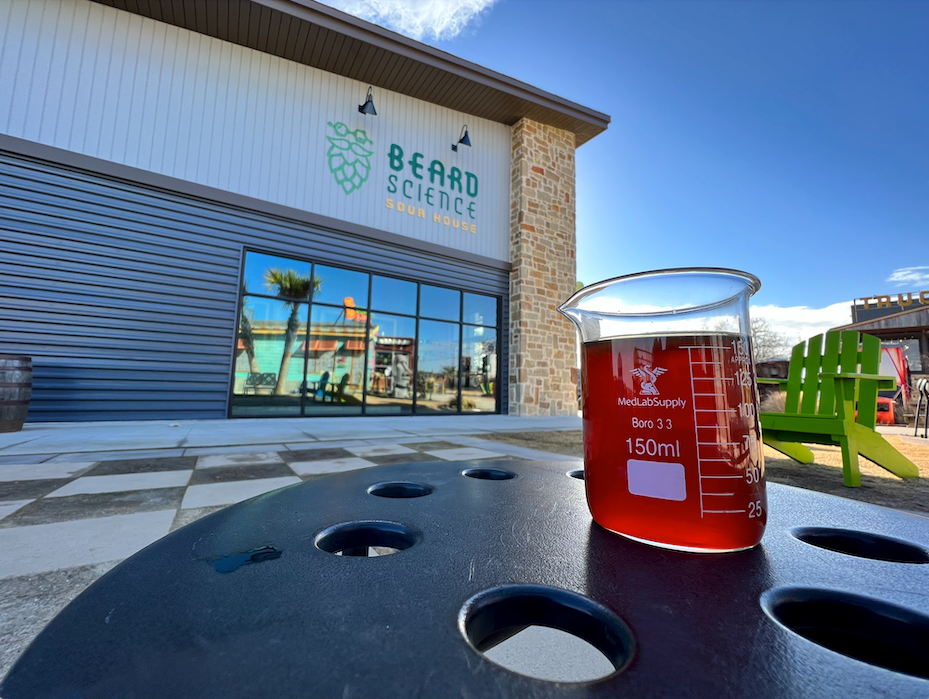 It's been just over a year since Beard Science Sour House opened its doors at Truck Yard in The Colony, setting itself up as the area's lone purveyor of strictly wild and sour beers. Quicker-to-market kettle sour beers have filled the tapwall to this point, but the first of many more long-term fermentations is now ready for release.According to Brew Boss Dennis Wehrmann, exploring the wild and sour beer realm beyond things fast and furious was part of the plan at Beard Science from the start.

"I think the concept of a sour house, the way we planned to do it, you have to compare to how you would start a bourbon distillery," says Wehrmann. "If you make bourbon, it takes years until the product is ready, and it's the same thing with a sour house. Wild and sour beers take time to ferment and mature, so while waiting for these to develop, we've been making kettle sours as well."

From this line of perpetual liquid projects comes the brewery's new Wild Sour beer. Starting with a dark base, Wehrmann literally let nature take its course with the recipe by way of spontaneous fermentation. The resulting spon beer is tasty and tart with bits of barnyard funk, dark fruit (raisins, plums) and maybe a hint of apple.

"We fermented the beer in our wooden oak fermenter - it's open at the top, and it's not temperature controlled," explains Wehrmann. "This lets bacteria come in from the air and from the environment and they start feeding in there, building lactic acids and other things. We had it in the oak fermenter for about 10 days, and after that we moved it into one of our wooden foeders, where it sat for almost a year."

On that note, it's all about timing with these beers according to Wehrmann. You never know what you're going to get, so it's trial and error as you sample and taste in order to determine when to release any given beer. With this inaugural Wild Sour offering, Wehrmann hopes to get customers excited about the prospects of what's in store for the future from Beard Science.

And what exactly is to come, you might ask? Wehrmann has a Flemish red and a champagne sour beer currently resting in foeders, along with a rather unique spirit-like dark sour beer aging in Ironroot Republic bourbon barrels (think calvados). Of these, the champagne sour is earmarked for bottles, which will be filled and allowed to condition for a time leading up to a 2023 New Year's Eve debut.